Jeux Online : The first question is about the relationship between: players, players and guilds, players and GMs. Will there be GMs connected 24/7 ? Will it be interesting for players to be helpful ? Will you help casual players to find a guild, groups, and so on ?

ArenaNet : Guild Wars will offer in-game support, but because Guild Wars isn't a traditional MMORPG, there will be less need for the "policeman" type of GM's that most persistent-world games require. Enforcer GM's become necessary when a game's design allows everyone to have at-will access to all areas in which players interact. With that unfettered access, specific problems arise that we've probably all experienced, such as loot stealing, spawn camping, and player killing, or non-consensual PvP.

Guild Wars has instanced missions. In addition to the many other benefits of such a design, instanced missions greatly reduce the need for a large number of in-game enforcers. By design, the instanced missions of GW will allow you to choose your party, or to choose to party alone. You won't experience those negative side-effects of the traditional MMO, and the need for in-game "policemen" will largely be eliminated. We will have support teams whom you can contact from within the game, of course, and issues that are reported will be dealt with as swiftly as possible. Our support team members will have as their primary objective maintaining the best possible playing atmosphere.

In addition, Guild Wars will definitely have game-enhancing types of support, where we will be cooking up new in-game experiences. With our streaming technology, we are in a unique position to offer all sorts of special events. We have some fun ideas on the drawing board, and of course we are always reading our fan forums to learn about the vision of Guilds Wars players and what they'd like to see in the game.

When you ask if the game will make it easy for a casual gamer to find a guild or gameplay group, the answer is "yes." First of all, the in-game features of Guild Wars will make learning about and choosing a guild a very simple process. And for those who just want to pop in for a few minutes of casual gaming, the process is easy! With just a few clicks of a mouse - choose an outpost, send or accept a group invitation, and click Enter Mission - you're playing!

Jeux Online : How do the loot's distribution work ? Is there an automatic distribution ? Does the gold only get looted by monsters or we can find it by exploring the map ? What's the regular loot rate, will we have lots of loots we can sell or will it be rare to find something other than gold ?

ArenaNet : Loot comes from monster drops and may also come as a reward for the completion of certain quests. Loot drops do not happen as frequently as gold drops occur, but they happen on a fairly regular basis. he dropping of rare items is pretty unusual though; I haven't seen one drop in the last several sessions I played. When a rare item drops, it does make people sit up and take notice.

The distribution system works very well in Guild Wars. The system we have at present reserves each dropped item for a certain party member. He or she has a set amount of time, presently about 30 seconds, to claim the item by picking it up. After 30 seconds, the reserved status ends and the item becomes available to anyone who wants it. Now, some of our testers and fans worry about this, and think "What if I'm in the middle of a battle and an item drops, but the battle takes so long that the reservation ends?" The answer is that both in-game chat and messages are logged, and it will be very easy to check the log to learn which party member was supposed to receive a certain item.

At this point, the trade interface for Guild Wars has not yet been finalized, and we're looking at a bit of time (a few days or weeks at most, I would estimate) before it is incorporated into the game. That interface may play a role in dropped item distribution, but I don't have details of how that might work. Discussions about the best possible way to divide loot amongst the players on a team have been long and lively on our private alpha forum. It seems that everyone has an opinion about how this should work! From "let everyone grab for the items, and the best grabber wins," to "keep a reserved system and never let the timer expire," we're reading all the thoughts on the systems and will take them into consideration as we complete the final design.

ArenaNet : First of all, yes, there are skills that are designed to be used in groups, such a Heal Other, Infuse Health, and the many buffs that a character can place on a team member. But your question about bi-profession skills is an interesting one, and frankly I've not thought about it much until you asked. You are asking if there will be a skill that requires a certain combination of two professions in order to use it, for instance, a skill that is created solely for a Necromancer/Ranger or a Mesmer/Elementalist. The answer at the present time is that there are no skills that require two professions to enable them. There are, however, skills that layer beautifully, so that a character of two professions can use one skill from Profession A and a second skill from Profession B with excellent results. As subsequent chapters of Guild Wars are released, I guess it's possible that there will be skills designed for the profession sets rather than each individual profession. But I have not heard of such a plan, and when you think about it, that would mean designing not just skills for each profession, but designing skills for 30 possible combinations! I believe that we will most likely continue with skills that are specific to a single profession, of which there will be more than 400 upon release of Guild Wars.

Yes, there are skills that are designed to be used in groups, such a Heal Other, Infuse Health, Martyr, and the many buffs such as Blood is Power or Order of Pain that a character can place on a team member. Resurrection is another skill that is only useful in a party, although I've been known to leave it in my belt and take it on single-player missions by mistake! Thanks to Jeux Online for this chance to chat about Guild Wars! 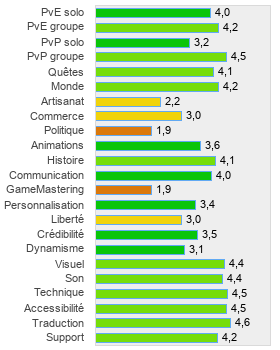